The Harrow Lib Dems have received a number of approaches from members of the ‘Harrow Cyclists: Climate Safe Streets Campaign’ setting out ‘Five Asks’ for Harrow. For ease of reference these Asks are set at the end of this note.

The Harrow Lib Dems share the two basic interlinked concerns of this campaign: reducing pollution and encouraging and facilitating cycling. Our policy document available on this website says:

‘We also want to encourage the use of electric vehicles and reduce internal combustion engine use, in line with wider national policies. Pollution causes many thousands of premature deaths across the country, and we will aim to reduce pollution in Harrow, particularly where pollution exposes people directly to risk.’

We will aim to create usable cycleways which prioritise connections with stations, secondary schools, leisure centres, and parks to encourage cycling and protect cyclists. As well as upgrading existing cycle paths we will give them much greater publicity and encouragement.

We will provide more cycle stands in shopping areas.

We will ensure that all proposals are technically sound, improve the quality of life in Harrow and minimise the disturbance to road traffic. We will consult widely and encourage full involvement of the public in decision-making.’ 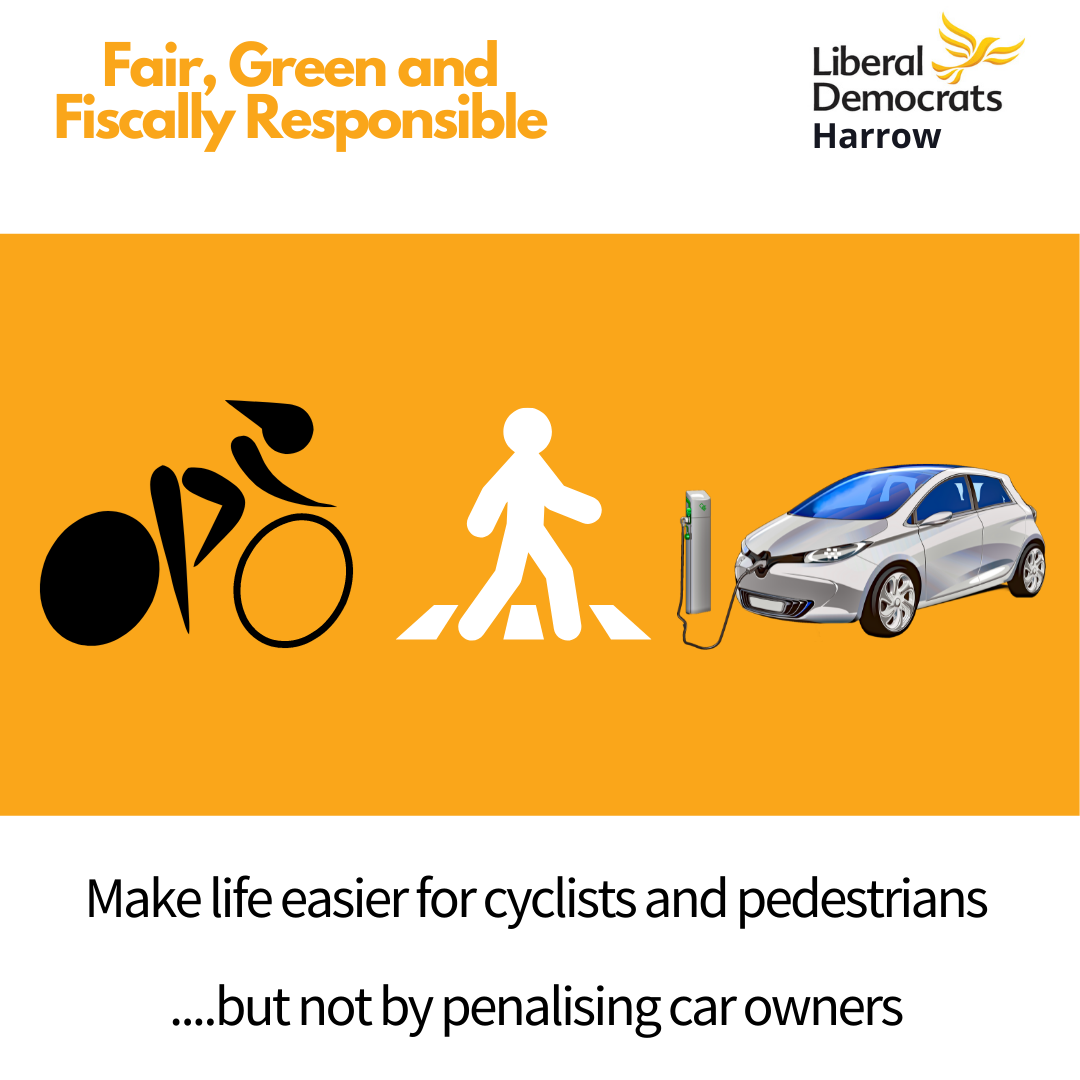 In addition, Harrow Lib Dems have pointed out that the Lib Dem Conference recently passed a resolution on air quality:

Harrow Liberal Democrats are fully committed to that resolution.

In principle we would aim to implement all the actions for local authorities decided by conference in Harrow. These are:

a) Install more pollution sensors near major roads and at every urban school.

c) Work to improve air quality in their area.

f) Promote schemes to allow the rapid and affordable replacement of petrol and diesel vehicles by lower polluting vehicles by local businesses in conjunction with the introduction of Clean Air zones.

There is therefore a good deal of commonality between the Harrow Lib Dem programme and the five Asks of the campaign. Furthermore, it is very much part of our programme to listen to views, particularly when they are representative of a particular group of Harrow residents, and we are mindful that our programme will need to be fleshed out. On that basis we have carefully considered the five Asks and these are our conclusions:

We very much see the health and environmental benefits of walking and cycling, and of public transport, but we wish to make these a positive choice. New cycling provision is essential, although it must not be done in a way that simply makes life worse for motorists. Indeed, it would be counterproductive to do otherwise, as recent events have shown. We will encourage and facilitate electric cars and aim to reduce pollution, in line with national Lib Dem policy.

We support the development and adoption of a comprehensive action plan aimed to ensure traffic levels in the borough are compatible with the capacity of the road network. This would be in the interests of everyone, not least motorists. We will not commit to reducing traffic to any particular level in advance but rather will judge what is feasible and desirable for all road users. We are mindful that three quarters of Harrow households have a car, and that for many it is essential. Any plan must take account of this.  But we will aim to persuade motorists to get out of their cars when they don’t need to be in them, not simply to penalise motorists.

Whilst in principle we favour 20mph limits where they very clearly help safety and reduce pollution such as for residential-only roads, we cannot support a blanket approach across Harrow.  Some roads in Harrow are dual-carriageways or are busy connecting roads and are clearly not suitable for 20mph at this time.  Having said that, we would review speed limits across the borough to see what is suitable for residents and communities.