Local Council corruption or National Government corruption - which would you choose

A dull thud on the carpet of one of our Liberal Democrat candidates for the Borough election announced the arrival of yet another Conservative Party election leaflet. The candidate noted that it had almost certainly been delivered by a paid deliverer, an expensive option which the Lib Dems can only afford occasionally. Undoubtedly the Conservatives must have access to greater funds than us!

The breathless breaking news on the leaflet says: ‘Police investigate Labour-run Harrow Council’, repeating a story which the Sun broke as long ago as 15 April. Harrow Council staff are alleged to have taken bribes to turn a blind eye to contractors who allegedly only half fulfilled a contract by replacing a pavement on only one side of a street. This would indeed raise serious questions for the Council. What anti-fraud measures were in place? Did anyone check the work? And were any reports from the public ignored? These are matters for which the Labour majority should rightly be held responsible if the facts are as reported.

Further things struck me about the article. Council can mean the councillors who are responsible for the running of the Council, as well as the totality of the Council’s operations. The Conservatives seem to be hinting that the police are investigating the (Labour) councillors, of which there has been no suggestion. An underhand tactic during an election.

Then a tidal wave of amusement and indignation struck me. How can our Conservative candidates, and my MP Mr Bob Blackman, who all support the present Government, be so vociferous about this alleged corruption and so quiet about the far greater corruption at national level. The £billions of unused and unusable PPE slowly rotting in Suffolk fields, at great expense to the taxpayer, often bought by Tory supporters who used the ‘fast track’. The £5bn fraud written off by the Chancellor. A finding just now made by a court that the Government acted unlawfully in its policy of discharging patients into care homes without Covid testing. And the joint funeral in 2020 of my elderly aunt and uncle with few mourners (their coffins draped with the union flag for their war service) while, it seems, 10 Downing Street partied on.

I joined the Liberal Democrats in part to get back to the country we used to have, where corruption was rare.

I hope you will vote for us on 5th May to help achieve that.

PS. A candidate has just pointed out that Bob Blackman MP has not himself been free from controversy over local government corruption. See: https://edm.parliament.uk/early-day-motion/13499/corruption-in-brent-council 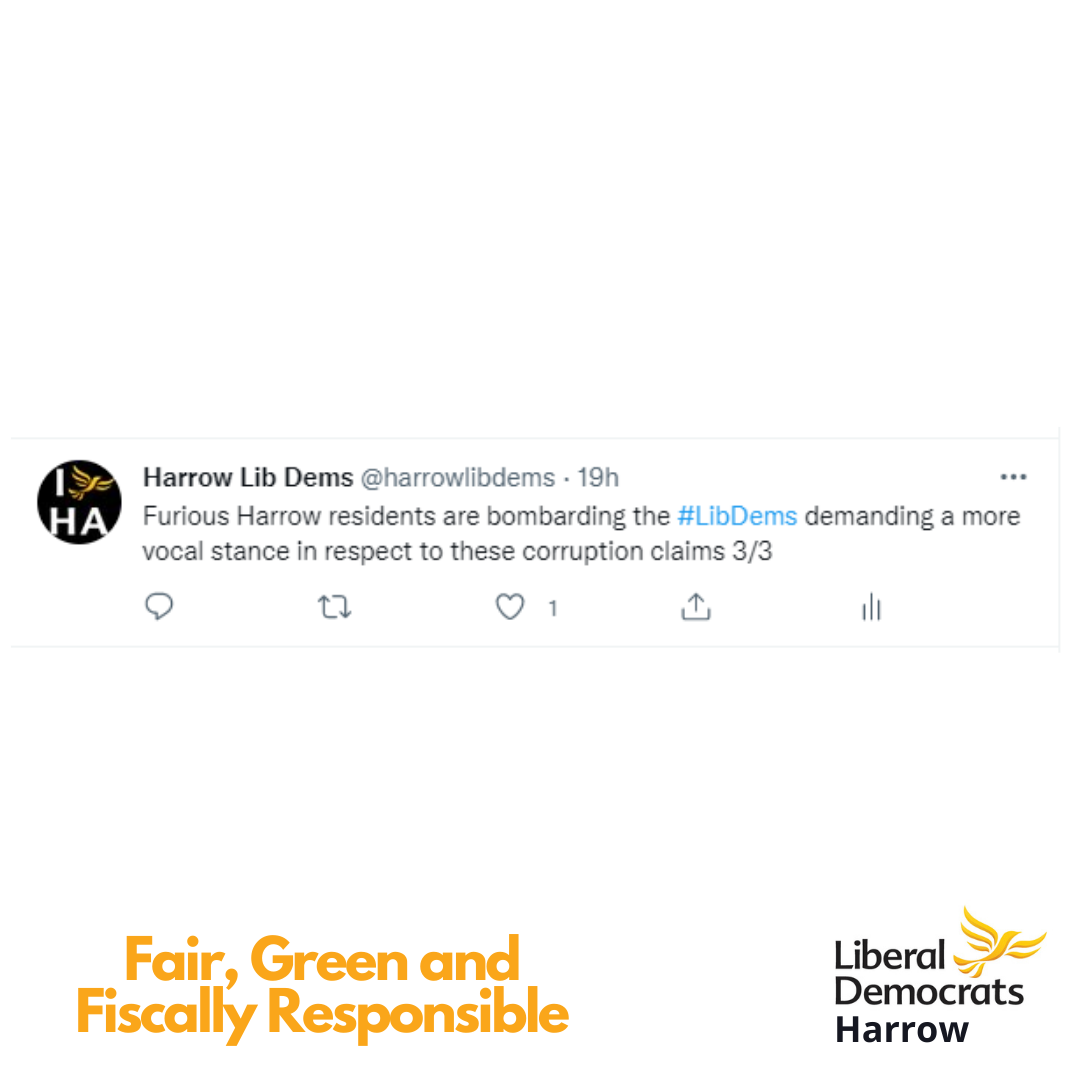