Has the Labour Council turned Harrow into a dormitory Borough?

Back in the mid-1980s, when I first came to live in Stanmore, there was a good deal of land that was used for employment purposes. On Honeypot Lane there were the Government Buildings, now the Stanmore Place housing estate. There were more Government Buildings at the foot of Brockley Hill, also now housing. Then there was RAF Stanmore Park, yes, yet more housing and RAF Bentley Priory, more luxury apartments. And it wasn’t just ex-Government sites that were being converted to housing estates. Also at the top of Stanmore Hill, in Warren Lane, stood The Grove, home of Marconi Defence Systems. Yes, you’ve guessed it – it’s a housing estate now. The work that used to to be done at the Grove is still done, but Harrow’s loss is Luton and Stevenage’s gain.

It is the same in Central Harrow, where Harrow’s biggest ex-employer, Kodak, is now a building site with many new bocks of flats being built not only on the manufacturing site, but also on their sports field across the road, a loss of green space for the Borough. Of course businesses often have a natural lifetime and Kodak’s was brought to an end by the rise of digital photography, but what is notable is the Council’s lack of concern for retaining employment land in the Borough, particularly for the high-value jobs that Kodak, Marconi and the RAF brought.

When I became a councillor in 1991, one of the first documents I received from the Council Officers was what was then called the Unitary Development Plan. For those of us on the Planning Committees, it was our bible because it set out the Council’s overarching policies on planning and development. Now it seems that the only planning policy that Harrow Council has is to cram in more houses with no thought to the consequences. And where are the people living in all these new houses going to work? Are they going to end up being commuters into Central London? If we have learned one thing  from the Covid lockdown, it is that we need to be more flexible about employment and reduce not increase commuting.

We have the University of Westminster Northwick Park campus on our boundary, yet have the Council even thought about leveraging the skills there and encouraging their staff and graduates to set up businesses within the Borough.  Hackney and Islington Boroughs have set up the East London Tech City, the so-called ‘Silicon Roundabout’, but there is a lack of comparable vision in Harrow. Creating the right infrastructure is crucial and this is where vision is essential, not just taking the developers’ shilling.

Harrow Liberal Democrats wholeheartedly support this policy and have already included aspects of it in their manifesto for this May’s elections.

Conference notes that:
I. Air pollution is the cause of many thousands of premature deaths each year in the UK. In 2019 fine particulate matter (PM2.5) was responsible for more than 33,000 deaths annually in the UK, and nitrogen dioxide (NO2) for 5,750.

II. Air pollution is one of the greatest environmental risks to health. The World Health Organisation states that by reducing air pollution levels, countries can reduce the burden of disease from stroke, heart disease, lung cancer, and both chronic and acute respiratory diseases including asthma. In addition, maternal exposure to polluted air can result in premature and low birth-weight babies. Children living in highlighted polluted areas are more likely to have reduced lung growth.

III. The United Kingdom’s national limits for nitrogen dioxide and particulate matter are set at four times the level of the World Health Organisation guidelines, and the principal source of these are transportation, with wood-burning stoves also being a major and growing contributor with some studies suggesting they contribute 15% of particulate pollution.

IV. The UK was frequently found to be in breach of EU air pollution rules when they applied to the UK before Brexit.

V. For the first time in December 2020 air pollution exposure was listed as a cause of death, in the tragic death of Ella Adoo-Kissi-Debrah, and that in a report to prevent future deaths published in April 2021 the coroner recommended a reduction in national limits for particulate matter.

VI. Groups such as the Clean Air Parents’ Network intend to take legal action against the Government to compel them to take action to improve air quality.

A. Everyone has the basic right to breathe clean air and urgent action to achieve this is vital to protect the health of all but particularly our children.
B. Taking action on air quality will take pressure off the NHS.

Conference reaffirms existing Liberal Democrat policy to:
i) Legislate to end the sale of new diesel and petrol cars and small vans, including hybrids, by 2030, and accelerate the installation of charging points.
ii) Oppose any net increase in airport runways across the UK.

Conference calls on the Government to:

Back in 2020 Harrow Council received £495k from Transport for London and another £100k from the Department of Transport. What did they do with the money? For those of us who lived near Honeypot Lane, one of the roads chosen for new separated cycle lanes, the answer was to create the worst congestion we had ever seen; the picture in the Harrow Times article was something we saw daily. What is not apparent from this picture is that just out of frame to the right is the local fire station; had someone’s house been burning down the fire engine would have been trapped in the fire station as the physical barriers of the cycle lane prevented vehicles moving into it to make room for the fire engine.

And this separated cycle lane, halving the lane space available for vehicular traffic on Honeypot Lane was not even needed; there was already a marked cycle route up the service road on the western side of Honeypot Lane, which linked to the existing Jubilee cycle route that delivered cyclists to exactly the same point at the traffic lights at the end of Honeypot Lane but instead took them through quiet back roads that already had a 20 mph limit. The plans of these are on the Council web site. So why create a new cycle route that merely duplicated an existing route? Could it be that the Council Officers never left their offices, but just drew lines on a map with no regard for what was there in reality? 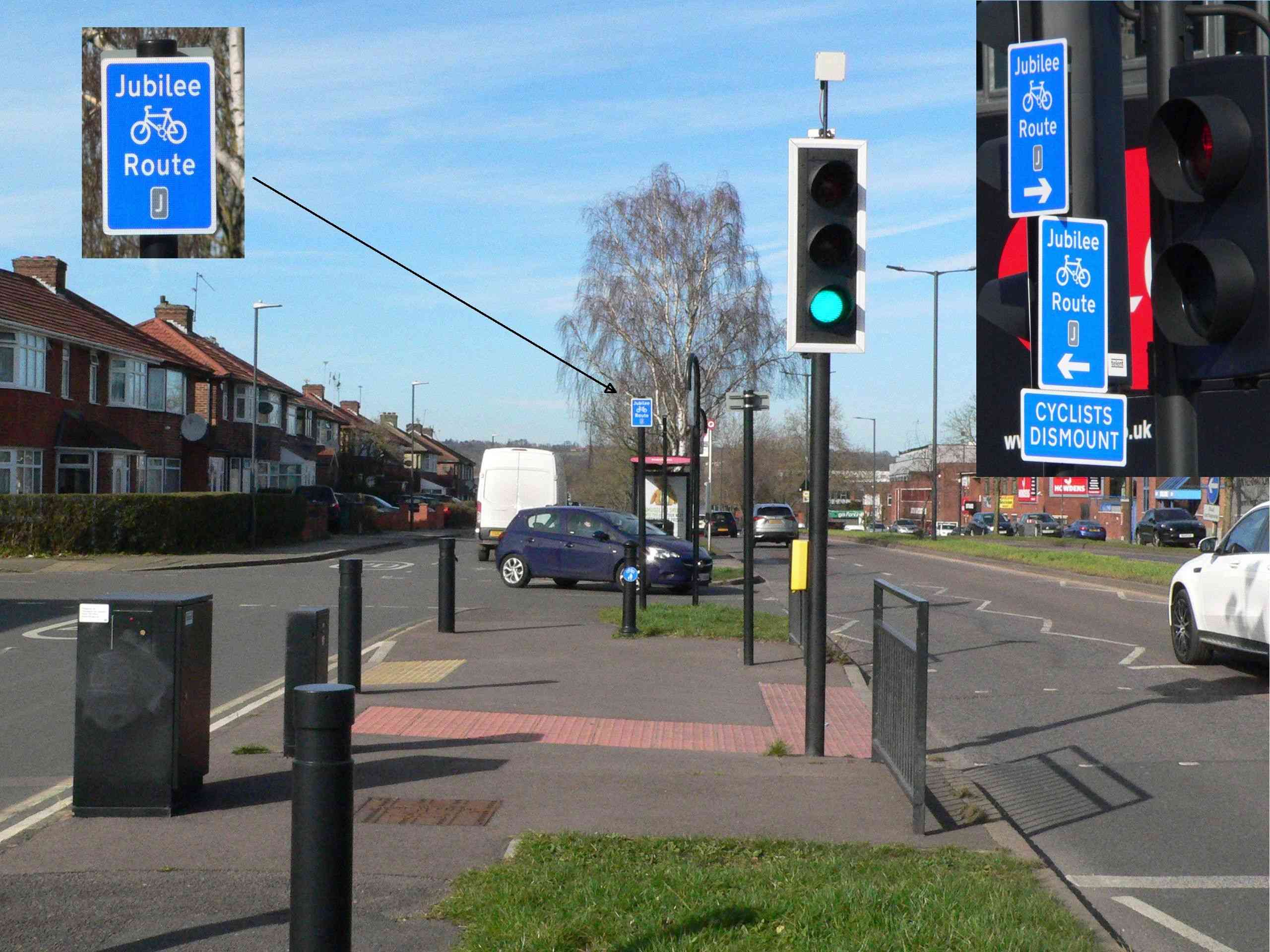 One feature of the Jubilee cycle route is just how badly it is signposted. For cyclists, travelling east along Broadcroft Avenue, there is a sign directing them to use the light-controlled crossing to get to the eastern side of Honeypot Lane to continue their journey, but for cyclists wishing to go in the opposite direction there is no direction sign from Honeypot Lane. The first route marker is over 200 metres along Broadcroft Avenue, which might, just, be visible to a hawk-eyed cyclist, were it not for the five mature trees along the verge in between. It really should not be necessary for a cyclist to have a smartphone taped to the handlebars in order to navigate Harrow’s cycle routes.

But, if you think Harrow’s cycling routes are bad, it is still above average for north-west London. Hillingdon’s is the best but even they don’t provide a link to Harrow’s cycling routes web page, although they do to the TfL cycle route mapper; at present once you cross a Borough boundary, you are on your own which, when crossing into Barnet or Ealing is literally true as those boroughs provide no usable cycling maps at all. Brent Council has a DIY mapping option but, looking at its representation of Harrow cycle routes, it doesn’t discriminate between cycle routes along roads and those along muddy tracks.

So what can we do to improve matters: first improve online information about cycle routes. There is every reason to have a cycling page on the Council web site that not only shows routes in Harrow but how they link to other Boroughs’ cycle routes and has a direct link to the TfL cycle route mapper.

Next we need to improve physical information. One can comfortably drive around suburban roads, just following the direction signs; why should cyclists not have the same information that would allow them to follow quiet routes without having to consult a map?

Lastly, we need to talk to cyclists and find out what they really want; there is no point  in creating cycle routes that no-one will use.

Our Programme for Harrow

Harrow, like the whole country, is facing multiple challenges: climate change; providing a decent environment for all; tackling crime; and trying to ensure that everyone has a decent place to live. Everyone has their own list.

The borough of Harrow has limited powers and can do more in some areas than others. The Liberal Democrats, if we are elected, will use all the Council’s powers to deliver what is set out here. In doing so we will maximise consultation – knowing what people want and, perhaps more importantly, don’t want is central to our way of doing things.

For example, tackling climate change and improving the environment, however necessary, can be contentious, and we look to move forward with maximum consensus, without which reform will probably fail. We will not be driven either by narrow ideology or by narrow economic considerations.

That is what the Lib Dems can offer over and above the other two main parties.

This is a reminder that the Annual General Meeting of the Harrow Liberal Democrats will be held on 14th December 2021.  Due to the ongoing, we believe its is more responsible to hold this AGM via Zoom though of course if you do want to join over a normal phone line, please contact us and we will arrange the details.

If you are a member of the local party and have not received your invite to the AGM, but would like to attend, then please contact us.

The nomination form for the Executive accompanies your invite and this also includes job descriptions of the roles.  We are actively seeking new candidates for the Executive Committee to bring fresh ideas, fresh thinking and a can-do attitude.

If you have questions about any of the positions and their areas of responsibility, or might be interested in standing, please email [email protected] Taking a position on the Executive Committee is an opportunity to make a real contribution to the activities and running of your local party.

My name is Sanjay Karia and I have been chosen by the Liberal Democrats to be our candidate at the by-election. The election is being held on Thursday 14th October 2021 to elect a new local member following the sad death of long-serving local Councillor Chris Mote.