Posted by | Updated 2017-08-01
Harrow Liberal Democrats welcome the suspension of Cllr Chika Amadi from the local Labour Group. Her comments were unacceptable and we believe she should resign as a councillor.

Liberal Democrats believe in an open, welcoming society, and remarks such as those made by Cllr Amadi have no place in our borough or anywhere else.

Harrow Liberal Democrats today called for Harrow Labour Party to look into why disgraced councillor Chika Amadi was selected to stand as a Labour candidate in 2014, after it emerged that she had already been vocal on social media about same-sex relationships, describing them as "bestiality" and "an abomination".

"We are glad that Labour has taken the step of suspending Cllr Amadi, but they have some serious questions to answer about why they selected someone who had expressed these repugnant and hurtful views in the first place.

We repeat our call for Cllr Amadi to stand down. Liberal Democrats believe in an open, welcoming society, and remarks such as those made by Cllr Amadi have no place in our borough or anywhere else. "

Pastor Chika Amadi
[Transcript: "Marriage in English dictionary is defined as a union (joining together) of a male and female. Anything other than this is 'BEASTILITY! Even animals observe this. And in the eyes of God an abomination and they who practice them will end in hell unless they repent and renounce it!" — Chika Amadi 11th March 2012]

Posted by | Updated 2017-06-07
The OECD has predicted that Theresa May will fail to secure a comprehensive free trade agreement with the rest of the EU by 2019, meaning the UK would revert to WTO trading terms.

According to Treasury estimates, which the government has still not repudiated, reverting to WTO rules would mean a long-term loss of £45bn a year to the public purse and a 7.5% hit to GDP.

The OECD is also predicted a sharp slowdown in UK growth to just 1% in 2018 due to uncertainty over the Brexit negotiations.

“Voters should listen to this eve of poll warning on the major economic risk posed by Theresa May’s extreme, UKIP-style Brexit.

“The hardline approach Theresa May has taken, insisting that no deal is better than a bad deal and planning to take us out of the single market, will seriously damage jobs and the public finances for years to come.

“According to the government’s own forecast, reverting to WTO terms would mean a £45bn loss to the public purse, more money than the entire schools budget.

“There is another way. The Liberal Democrats will fight to keep Britain in the single market and customs union, and to ensure the people have the final say on the Brexit deal.”

Have you received your LibDems free leaflet drop yet?

Posted by Harrow Lib Dems | Updated 2017-06-05
You may be aware that all parties standing in any constituency have the right to one free leaflet drop by the Royal Mail.

We, as Harrow's local Liberal Democrats party, are no exception and put together what we consider to be a true view of what we believe matters to the people of Harrow, not only as local residents, but also as residents of our country.

Many of you have received this freepost already but we are hearing from our supporters in Harrow East (including Belmont, Canons, Edgware, Harrow Weald, Kenton, Queensbury, Stanmore, and Wealdstone), that some have not yet received this vital post from us, demonstrating what the Harrow Liberal Democrats stand for and what our priorities are. Of course we will be raising this issue with Royal Mail to understand what went wrong and what the reason for the delays are, but as a further urgent mitigating action, you can find below a downloadable, shareable PDF and images here with the content in all its glory.

Whether you are a current or prospective supporter of the Lib Dems, we urge you to please share this far and wide, through all your social media channels or even by printing a few and hand delivering them to your neighbours.

As a reiteration, your local Harrow candidates for the Liberal Democrats in this June's election are: 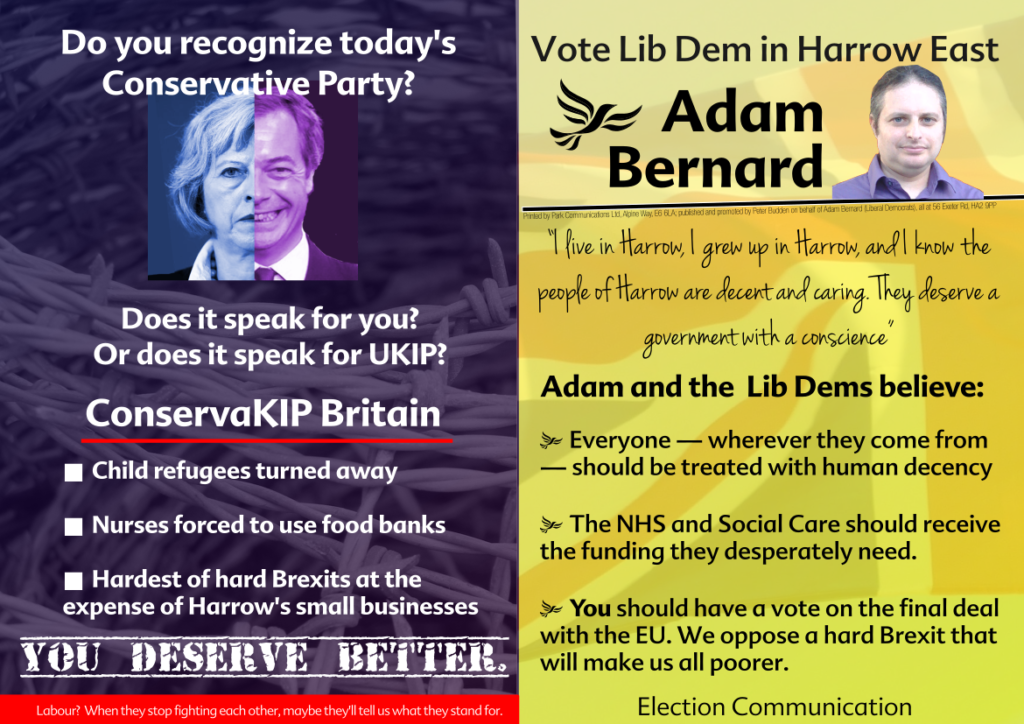 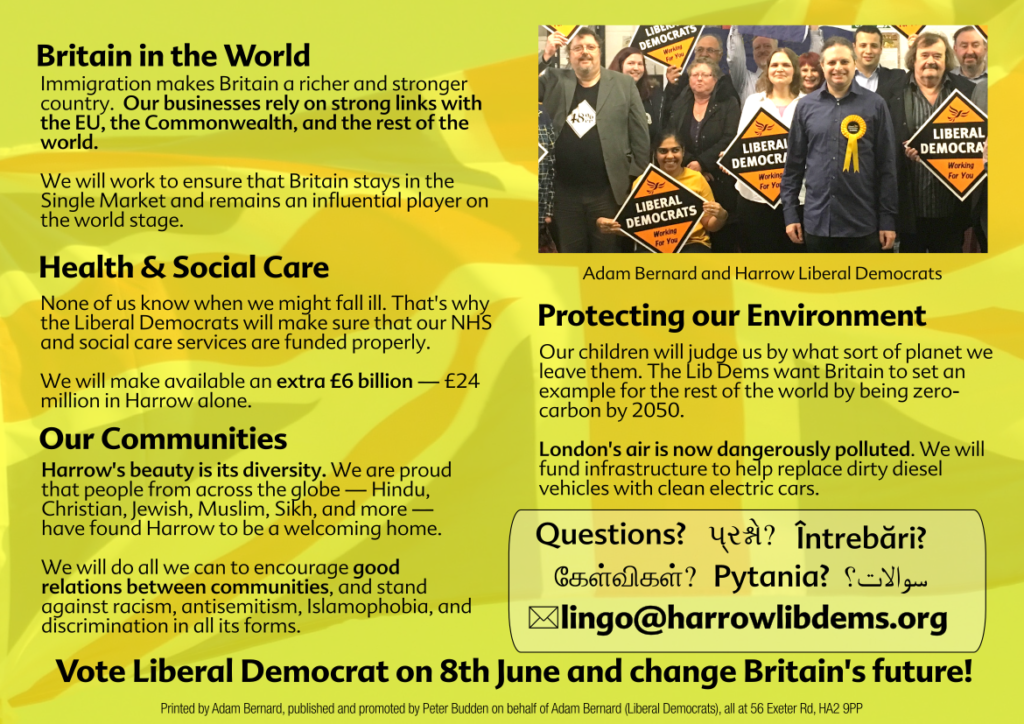 Posted by Charis Pollard | Updated 2017-05-13
The Liberal Democrats have announced plans to address the housing shortage in Harrow and build more affordable homes - an issue which we know is important to so many residents.

There are currently 1,075 families in Harrow on a waiting list for council homes, up/down from 762 last year - a rise of nearly 30%.

In addition, official figures show 651 homes in Harrow have been empty for over six months.

The Liberal Democrats would introduce a legal requirement for smaller housing developments to include affordable homes, make it easier for local authorities and housing associations to borrow money and set up a new government-backed Housing and Infrastructure Development Bank.

The party would allow local authorities to hike up council tax on empty homes by up to 200%, including second homes. Local authorities could also choose to impose penalties on developers who leave plots of land empty for over 3 years, to tackle so-called land-banking.

“Hundreds of families in Harrow are struggling to find a decent and affordable place to call home.

“Many young people in particular are finding it virtually impossible to get on the housing ladder.

“At the same time, homes are sitting empty and plots of land bought by developers are not being used.

“The market is broken and has failed to deliver. That is why we are setting out radical plans to fix the housing crisis.

"A better future is available. Have hope, vote Liberal Democrat and we can change Britain's future and build the affordable homes Harrow needs."

The Liberal Democrats have announced they would plug funding gaps for the NHS and social care by putting a penny on income tax, in their first major manifesto commitment of the election campaign.

This is the party’s flagship spending commitment and its first major policy announcement for the election. The Liberal Democrats manifesto will also set out a ‘five-point recovery plan’ for NHS and social care services in their manifesto.

At least 70% of Brits would happily pay an extra 1p in every pound if that money was guaranteed to go to the NHS, an ITV poll found last October (link).

"Right now in Harrow we are seeing patients lying on trolleys in hospital corridors, urgent operations being cancelled and the elderly being denied the care they need.

"The Liberal Democrats are prepared to be honest with people and say that to secure the future of the NHS we will all need to chip in a little more.

"A penny in the pound would allow us to invest in improving local NHS services and ensuring the elderly receive the care they deserve.

"This Conservative government has left our health and care services chronically underfunded - and while the crisis gets worse they just don't seem to care.

"We cannot continue asking the system to deliver more and more, without giving it the resources to do so."

“The NHS was once the envy of the world and this pledge is the first step in restoring it to where it should be.

“A penny in the pound to save the NHS is money well spent in our view.

“But simply providing more money on its own is not enough and that’s why this is just the first step in our plan to protect health and care services in the long-term."