The Cost of Living Crisis

Inflation is a general increase in prices, in which one price increase feeds into another, and wages rise to keep pace. Our official UK inflation rate is now 6.2% and set to go higher. Inflation is dangerous. Not just hyper-inflation – remember the barrowloads of money in the Weimar Republic – but the inflation we saw in the 70s which led to social strife, the Thatcher government and a brutal cure which destroyed swathes of UK industry.

Prices rise from time to time without necessarily causing inflation, and we are seeing increases in energy prices due to the Covid pandemic and the Ukraine war, and soon food price increases also due to the Ukraine war. There are other factors such as increased trade friction and labour shortages which drive up wages, both largely due to Brexit.

These price increases could be transitory and not do lasting damage, but only if they are properly handled. Energy prices are going up by 50%, which will devastate those who must choose between heating and eating. Mitigating cost pressures at this point would help nip inflation in the bud and, equally importantly, alleviate suffering. The Government have not risen to this task. Instead of using Universal Credit, which could target the less well-off with precision, they have chosen to spread meagre resources widely and thinly, which will not be enough to make much difference. Other countries have done better. France is going to have energy price increases of only 4%. There is every chance that with such a paltry response inflation will take hold here. 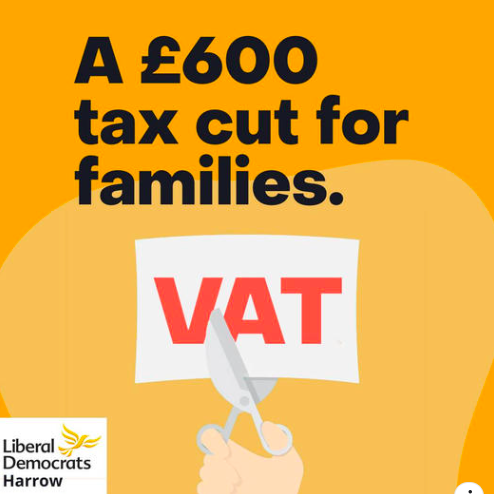 LibDem policy aims to tackle this cost-of-living crisis effectively in the interests of all. Ed Davey has called for an emergency reduction in VAT from 20% to 17.5% (possible because inflation is pushing up VAT receipts) and a windfall tax to stop inflation taking hold and to help the vulnerable. The LibDems would have kept the £20 uplift in Universal Credit, which would also help the most vulnerable. And if the Conservatives had continued with the LibDem push for renewables our increases in energy prices would be less severe. The Conservatives are not doing a good job – it’s time for a change to responsible government.