The Low Traffic Neighbourhood (LTN) scheme in Harrow has been one of the most evident failures of Harrow Council.

What went so wrong in Harrow?

This is not a matter of general politics, but stems from this particular administration. During the COVID pandemic, 72 LTNs were rolled out in London, funded by the Department of Transport (Tory) and enabled by the London Mayor’s Transport Strategy (Labour). Most, if not all, the LTNs have been successful, including those implemented in boroughs administered by Labour. They are delivering benefits for taxpayers’ money.

What has caused the waste of more than half million pounds of public money and reputational damage which will almost certainly prevent access to future to funds from TfL or from the Department of Transport?

We have analysed the events and our answer is: incompetence coupled with bad policy.

The lack of competence is easy to spot. If cycling routes are starting from nowhere and ending nowhere, they cannot end up well. The impact on traffic transferred to main road links by secondary road closures, or by the closure of one lane on double carriageways, had not been accounted for by Harrow Council, creating congestion and problems with emergency vehicles.

It added up to an atrocity in British traffic management. Incompetence appears clear also in public participation and stakeholder engagement. They were so badly organised that the Harrow case should be presented in the textbooks to show what it should never be done, in the consultation phase, during the management of the grievances, and as remedial actions. 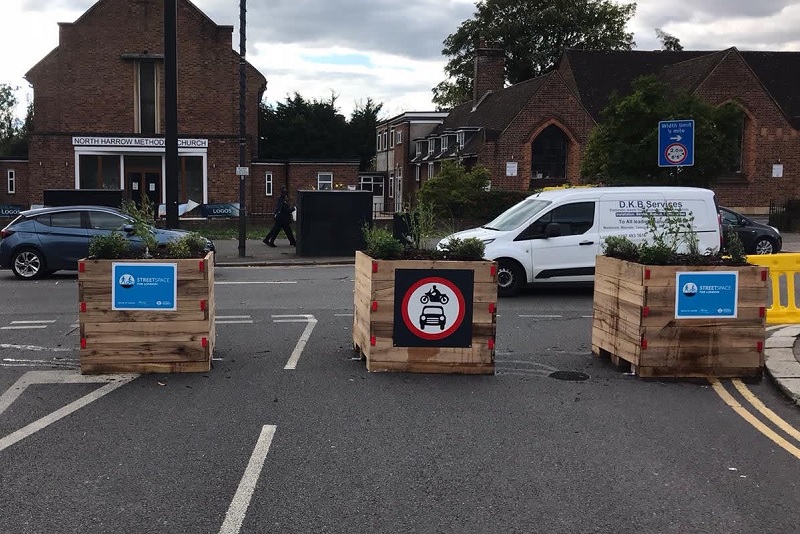 The bad policy is more subtle, deeper and has wider roots. It does not appear that the LTN in Harrow was designed with the well-being of citizens in mind, but solely for the pleasure of other stakeholders. The main target of Harrow Council is attracting developers to keep their very expensive administration afloat. This requires the council to show off figures, so-called key performance indicators, which include, for example, the length of cycling routes, regardless of whether they are good and serve the public or are bad. Therefore, the cheapest are those that get done, even though they turn out to be useless.

The same point is valid on all policies. If, as an example, the focus of education is to keep high OFSTED ratings of local schools, because this would attract new residents and thus developers, it does not necessarily mean having good schools, especially when this requires to hide under the carpet the real problems schools in Harrow encounter.

We, the Liberal Democrats, hope that whatever administration comes out from the elections in May, will put at the centre of their actions the citizens of Harrow, our well-being, quality of life, as well as preserving the beauty and functionality of our town. We also hope that the Council will build its capacity in negotiating with developers, and be guided by technically sound approaches.

Does a ‘Liberal Democrats’ way exist to make LTNs in Harrow work?

Liberal Democrats constructed LTNs would be part of our general policy for a greener future. This combines development, housing, and transport, - in a word, supporting sustainable communities.

This would require addressing road traffic which has increased exponentially, while recognising that for many the use of the car is not a choice. All of us are experiencing already problems on roads in Harrow, and long queues at traffic lights. That is the consequence of population increase which very much keeps going.

We want to control traffic not because we are ideologically against motorists but because at the current rate of increase the roads will be even more congested and will soon loose their functionality, making it very unpleasant to drive and creating even more polluted air. Although some small adjustments on traffic management might improve the situation, the true choice is built new roads or control the traffic. We have chosen the latter.

To control the traffic, we need to offer alternatives to car use. This means pedestrian routes, bike routes, public transport. In doing so, we need to identify the potential origins and destinations of traffic routes to find the most attractive for alternatives means of transport. This would, for example, identify priority links in Harrow and equip them with sound and safe cycle routes. We would include routes to stations, schools, parks, shopping areas and supermarkets. Some of them should be built by developers, but this does not seem of any interest in the agenda of Council negotiators.

In defining which bike routes to develop, we will not look at length, as we do not have developers to please. The figures of the length of cycling routes compared to the population in Harrow remain very bad. This is because of a long legacy of neglected attention to the issue. We would measure the success of our cycling routes by how many commuters, students, shoppers use them and ultimately how many cars will be taken off the roads.

In doing so it is possible that some traffic restrictions might be required, however, these will be finalised to enable the feasibility of safe cycling routes, not to punish motorists. Moreover, restrictions should not impact on major road links which are already under pressure because of the growing population.

This must be associated with a new parking policy. Currently in Harrow there is a patchy and illogical system of Controlled Traffic Zones which are the result of years of near-random referendums, consultations, and petitions and of a Council that has tried to please everyone, but probably only pleases the loudest. The outcome is there are some unlucky car owners who are paying a substantial fee to park in their streets, others who are not paying but cannot find a parking space because their street, close to a controlled area, is invaded by who do not have parking permits. The fee is even more unfair and anti-progressive considering that those who have the privilege of a driveway or a garage, typically more affluent families, do not have to pay.

We do not believe that the free parking for one hour, the flagship of the Tory campaign, would sort out the issue. It is not matter of money, if this is what Harrow needs the money can be found. Although the Tories do not say how much and where, that is not the point. The issue is that the one-hour parking free is a bad idea because it will attract more cars to the centre, so increasing the traffic that is already congested.

That is not all, there is enough parking already in Harrow only because they are not free. If parking were to become free, it will be soon saturated. People who really need to park close to wherever they are going won’t find where to, cars will start going endlessly in circles. Thanks Tories. Are Conservatives proposing the construction of new parking too? But as we know, Tories are populist.

Liberal Democrats in Harrow would manage parking by the adoption of the Harrow Card. The Harrow Card will be an App for most. It will be distributed to each household.

It can be used for several services, such as Council Taxes, the waste recycling centre, the Leisure Centre and libraries. It will also offer discounts from shops in Harrow. It will be possible to link the card to the numberplates of householdcars enabling such vehicles to park in certain areas, with a special tariff or free parking time.

The card would not need a tag on the car since traffic enforcement will be linked to the plate numbers database. This would give the advantage of increased flexibility in determining parking restrictions across Harrow, to give permissions when really needed, and above all removing the current unfair controlled parking zone system.

The cost of our proposal

Certainly, there is a cost setting up Harrow Card, however, we estimate that it would be much less than the money that the Council has wasted installing and removing LTNs in 2020 and 2021.

In conclusion, the Liberal Democrats of Harrow have much to offer to the administration of our town and we hope that you will give voice to us. We will inject new energy in an administration that is old and tired. We will bring new ideas and avoid the catastrophic waste of money embodied in the LTN fiasco.

We have a clear idea on how Harrow can improve and the capacity and capabilities to put in place a better Harrow.